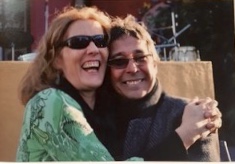 There was a rare and lucky era when I found my life suddenly unfolding in the middle of an extended, and completely magical moment in time, a moment that, because of my youth, I mistakenly assumed would last forever. I didn’t know then what I know now: That is, of course, that nothing stays the same.

In late February of 1984, I stepped off the rickety bus from Mexico City and into the richly beautiful pink city of San Miguel de Allende, Mexico. Now this was San Miguel before even the notion of a thing called “Starbucks” had been conceived, when only a handful of people had television sets, and absolutely no one had a cell phone.

I was initially there to learn Spanish and I was making friends — but not just any friends  — not your run-of-the-mill twenty somethings. The people I was meeting were bursting with talent, young talent infused with passion and comprised of artistic, poetic, painterly, powerful, musical, idealistic and creative energy. Life suddenly blossomed into an enchanted, mini-magical epoch. At the center of this was, of course, music, and at the center of the music was Frank Bravo and his band, La Propia Salsa.

Growing up in suburban Connecticut on classical music and show tunes, my scholarly mother didn’t allow any television except Ed Sullivan, on Sundays,. Absolutely no cartoons, and positively no Dr. Seus! By the time I was 18 I had never,  ever heard country music so you can be sure that, upon arriving in Mexico, the steamy rhythms of Salsa music were a far cry from anything on my radar. But the first time I soaked in that beat, the clanging cowbell and those super-hot rhythms that just move, I was hooked for life. This music that ignited me came out in the rich and gritty voice of the one and only Frank Bravo, a real talent from Venezuela.

In my opinion, Frank was one of the greatest salsa singers I have ever heard. Because of Frank and his love for classic salsa, I’ve heard the greats and Frank was, for me, one of the very best. It wasn’t just his voice, never off key, never bored or boring. Frank was the whole package. He simply had that ‘thing’, that star quality that comes from more than the having developed a craft or an art. It comes from love, and not just the love of the genre he clearly so appreciated and honored. With Frank, you could literally feel and see his deep affection, amusement and delight in his audience. He was clearly energized by not only the music but the audience he was entertaining.

Frank would watch his the people dancing with a delighted twinkle in his eye. No matter how many thousands of times he sang the same classic songs, they slid off his tongue as fresh as if he were just discovering them for the first time. Never once did I seem him tire of a song or of the people he was entertaining.

Frankie wasn’t doing any of this alone. In the early 1980s, San Miguel was bursting with young talents, both in Frank’s band and working independently. Willie Royal, a young soloist, steamed up the restaurant bar at Mama Mia restaurant, as he practically danced with electric violin. Wolfgang Fink performed in the main dining room, a really good flamenco soloist whose girlfriend, Diana, would sit by him and clap the “palmadas.” Both Willie and Wolf were later paired by Francesca Fisher, of Fisher & Paykel heritage, for a movie she produced, giving birth to the duo Willie & Lobo who enjoyed moderate international success. Also part of the band was Jose Luis Chagoyan, aka Hopalong, who still enjoys his long career in music. There were also Solomon, a jazz musician at heart but then part of Frank’s band, and a firecracker named Mauricio who was the hottest thing on cow bells, ever. There were others whose names escape me.

Frank was the center of the action and we were the ripples around him and his music. Not all were musicians. There were accomplished artists, Keith Keller and Dan Ruffert. Francesca produced the town’s first ever music video. And Frank’s talented wife, Victoria Robbins was at that time earning her masters in global education and would later go on to launch what remains today the very successful Victoria Robbins School.

I think Frank had an intrinsic grasp of the gestalt that is created between the stage and audience. The word “gestalt” is generally misunderstood to be something better than the sum of all its parts but this is inaccurate. A gestalt is something different that the sum of all the parts, and it can be different every time those parts come together. Frank not only understood this, he delighted in the possibility of what could be created freshly with each new gig.

I remember Frank as having a puckish, boyish grin, almost happily devilish at times, a bona fide sparkle in his eye, and a completely genuine love for people and for music. Never once did Frank make me, or I think anyone, feel bad. But his real true love, besides music, was Victoria.

The life of a musician is a noble one but it has its dangers. A musician’s routine isn’t routine at all; it comes with odd, late-night hours, emotional highs before and during performances that can be followed by sudden, echoing silences when the venues shut down. A musician’s schedule not generally ticking on the average 9 to five run and these pitfalls can take their toll. It is a life better held together when the singer has something solid to anchor and support it. And for Frank Bravo, that anchor was Victoria’s steadfast, forever love.

Frank’s gift to us came as much from God as it did from Victoria. She was there through it all and for decades, for the successes, failures, and ultimately illness. Victoria was Frank’s everything. I don’t think he would have flourished as the musician he was or have had the career he did without her. I’m certain of it and I feel certain so was he. Not only did Frank know this, he appreciated it when he was alive. He adored her and he would have been lost without her.

After only a few short years in San Miguel de Allende, I reluctantly moved away, visiting only twice, and I missed Frank and Victoria actively over all those decades. We all have people in our life whom we know will accept us back into their fold as if no time has passed, and Frank and Victoria were two of those rare people for me.

I can both see and hear Frank in my mind and have done so over all the years I missed him. In my memory, he is on a local stage, he’s wearing a fine white outfit, maybe holding a cowbell or some other hand instrument. He’s singing and stamping out those bad-ass salsa steps, vibrating his shoulders, a knowing and slightly devilish glint in his eye, the gritty voice, the joy, Victoria at times in the wings. This is how I will remember Frank Bravo.

I can’t find my old tapes of La Propia Salsa and the Propia Salas. I can no longer find on the net his wonderful voice but I found one link here. It doesn’t do him justice. I miss you, Frankie.

The Value of a Vote